In the simple terms, the formula of Bollywood has always been to take run-of-the-mill themes and melodramatize the heck out of them – the lovers from different social classes, and the love triangle. So when a movie does the exact opposite, taking a peculiar theme and treating it as a normal, everyday phenomenon, it comes as a welcome surprise. Though the industry-of-entertainment is witnessed to bring out each and every scene of the society, it is common to believe on the concept of modern medical science, so. 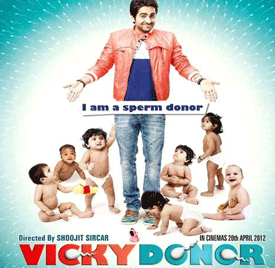 Vicky Donor has an absurd, mind-boggling premise; whoever heard of  someone making a living off of sperm donation? But Vicky      Arora (The Lead Character of Vicky Donor) does, and his story   is told with panache and sensitivity. In fact, Vicky Donor almost  experiences like a documentary on the virtues of sperm donation,    though one that is fully funny and the heart-warming.

Though Vicky Donor; a new Bollywood sperm donation film is  now showing across the country successfully. Seemingly, talking  about sex is still a cultural taboo in the conservative India, but a  Bollywood filmmaker is thinking to conduct in change with a light-  hearted take on infertility and sperm donation. ‘Vicky Donor‘, a romantic comedy about a sought-after sperm donor at a fertility clinic, is become really a part of a wave of the recent films gearing subjects rarely addressed in Indian cinema – gay relationships, biopic on sex symbols and now sperm donation.

Indian audiences, torn between rigid social mores and the challenges of a quickly modernizing nation, have slowly accepted Bollywood films with bolder themes. But sperm donation may be pushing the limits. Through this new concept, there are chances that youngsters may tell their parents to go and watch the film.

Infertility among Indian men seems on-the-rise, according to all the recent surveys.  While it was always the women who were blamed for failing to conceive earlier,  the trends show that men are now comprehending their own insufficiencies  amid a spurt in sperm donation and growing up awareness on the issue. So, the roaring success of Vicky Donor in the box office takes up the issue out of the closet.

In India’s copiously mounted Bollywood movie industry, a small budget film on the rather forbidden subject of sperm donation made so much of a ripple earlier this year that it catapulted a TV anchor turned and small time actor into instant prominence.

Ayushman Khurrana essayed with natural ease the role of a young sperm donor in the recent Bollywood film Vicky Donor, where he is shown driven to the action first by influence by a desperate fertility expert and then by the lure of easy money. 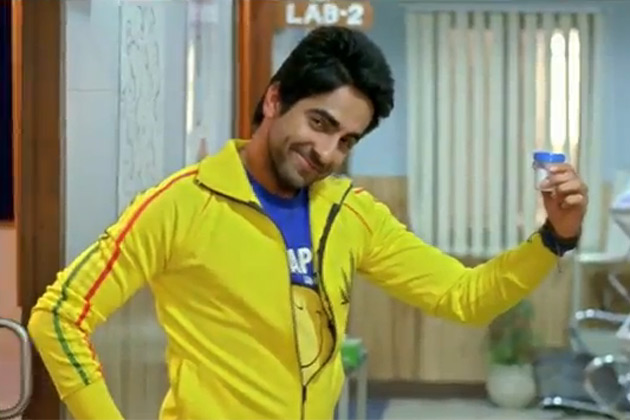 While the box office success of the low budget movie that mixes comic moments with the serious social issue of childlessness and sperm donation, is thoroughly been Music to the ears of  its maker, the actor surprised all when he acknowledged himself donating sperm.

Truly, Sperm donation is nothing unusual in India, but people prefer to keep silent on it. While Khurana is trending in Indian showbiz and media circles, people unexpectedly talk about sperm donation in a country where childlessness is often a cause of social tension with women mostly blamed for the infertility even before their male partners experience a test.

As per to a 2011 study report by the Mumbai-based International Institute of Population Sciences, infertility is rising fast in the metro cities of India, in spite of its 1.21 billion plus population, reports for nearly 20 million infertile couples on an average every year.

Besides to its real concept, it is meant to keep in mind that much of the dialogue in ‘Vicky Donor’ is sourced from real-life anecdotes, with the filmmakers being inspiration from the doctors and patients they met while researching the movie. The trailer shows a childless couple seeking a cricketer’s sperm sample so that their offspring could play for the country and also create a lot of money. “This is a subject that we talk only in our bedrooms but infertility is a huge problem in this modern society”.

Despite marketing attention-grabbers such as men dressed in sperm suits, the makers of ‘Vicky Donor’ may get it difficult to counter the stigma attached to sperm donation. No mainstream Bollywood star, with the exception of its producer, John Abraham, features in. The director brings his words out that he did not even bother asking the Indian film industry’s reigning heroes.

“Any star would have liked the script but they would not have agreed to be a part of the film, I knew that,” said by its director. As a substitute, newcomer Ayushmann Khurrana, a known face on Indian television who donated sperm as part of a reality TV show task, was cast in the lead role.

“Sperm donation is something not generally discussed openly, at least no one has the knowledge of the lives of professional sperm donors in India, as said from many critics. If this film is able to give a perspective to the whole thing even if in a comic way, then the director will be worthy of kudos to bringing an important issue out in the open.

As a result, the movie-Vicky donor has screened across the UK, including at Odeon Cinema Trafford centre Manchester, Glasgow and Leeds-Bradford, also see it at Cineworlds across London. So what to keep in mind after the movie is become all-answers to the modern medical science.